Will Gorlitz at MIchael Gibson Gallery

Will Gorlitz is a painter’s painter. As such, he is as good as they get, here or anywhere. His recent exhibition at Michael Gibson Gallery revealed the best of what Gorlitz has to offer: sophisticated and intelligent painterly contemplations rendered with a largely unparalleled material sensitivity. Although thematically congruent, the body of work on display carries a considerable range of iconographic, formal and material diversity that continually forces the viewer to engage these works as specific instances: individual propositions in Gorlitz’s substantial and resonant argumentation.

All of the works in this exhibition deal with assumed human domination over natural order. Although Gorlitz’s paintings are beautiful, the consequences of this bipedal-occupation are decidedly less so: dead sub-Saharan animals are littered through creamy-white, wet-winter landscapes. Flowers are plucked and chopped, vased and smashed onto lugubrious, muddy-gray, atmospheric grounds. Fruit comes in Warhol-coloured cans: drained of their contents and left for dead. Rain forest trees are grafted into climate-controlled glass homes. Even the moon is harnessed into Gorlitz’s (telescopic) lens: landed on with unprecedented zeal, only to be abandoned for further frontiers. Despite the funny-strange, absurdist character of many of his motifs, there is a profound sense of tragedy that invades Gorlitz’s allegorical impulse, with only his canned tomatoes costing anywhere near Ms. Mitchell’s prophetic “dollar and a half”.

In Gorlitz’s work, different subjects provide subtle shifts in material response. Old Crescent, Waxing Gibbous (2009) is a one-layer-thick, wet-on-wet painting of two moons on a medium sized, circular-tondo-canvas with a mostly-matte, unvarnished surface. Elephant (2009) is a one-layer-thick, wet-on-wet painting of a dead elephant in the snow on a smallish, landscape-aligned, rectangular wood panel. Little bits of ungessoed, wood ground creep through to the yellowy, unseasonably-warm, varnished surface. Empty Cans (2009) shows two open tomato cans with their bright coloured labels torn astringent on a large, portrait-aligned, off-square trapezoid. The warm-gray background space is lush and shiny with a varnish medium mixed more directly into the paint. The cans themselves, however, are more matte. All of Gorlitz works employ an otherworldly array of brushwork: like he’s hired Manet out of his afterlife-retirement to be his personal brush-caddy. The range of Gorlitz’s substrates is likewise remarkable. Most framing proportions are so aesthetically conventionalized that they disappear as ‘background’. Gorlitz’s continuous emphasis on idiosyncratic framing forces us to deal with our position as spectator to both his paintings and the varied tragedies that they describe. 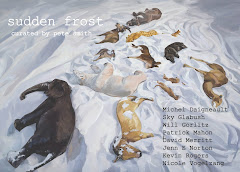 Will Gorlitz at Michael Gibson Gallery 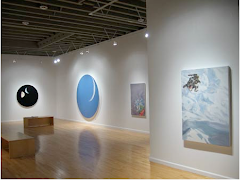 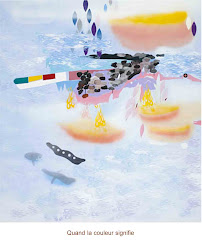